We make decisions every day, all day long. Sometimes we are aware of it and sometimes we are not. Our decision process is affected by many factors. Some are under our conscious control while others are not. In order to sharpen our decision process, we gain knowledge, practice, and then reflect. We are selective and gain knowledge from different sources, practice in the appropriate setting, and reflect alone or with others for feedback. It is important to explore all possible clinical reasoning pathways as we don’t know which process will get us in the right path.

Clinical reasoning is one of the most complex skills that someone involved in the healthcare field may develop. In a commentary that looks into situated cognition for assessing clinical reasoning, Holmboe et al [9] define clinical reasoning as “the cognitive operations allowing clinicians to observe, collect, and analyze information that ultimately leads to an action (i.e. diagnosis and therapy).” In this blog, we discussed diagnostic tests and their relationship with likelihood ratios as well as heuristics and cognitive errors. More recently Hall et al [1] explored Bayesian reasoning with residents to mitigate heuristics reasoning and found residents did not perform well.  Clinical decision making is one of the hallmarks of physicians, but still remains an under-examined subject.

System 1, System 2, and Debiasing: Good framework to reduce errors but not perfect

We have gotten more insight about decision making from the works of Daniel Kahneman, especially after publishing his book Thinking, Fast and Slow. In his book he describes two processes of decision making: System 1 which is fast, effortless, automatic, and System 2 which is slow, effortful, and analytical.

The concept developed by Kahneman has been translated to the clinical arena by many authors, most prominently by Dr. Pat Croskerry. His work, mostly in emergency medicine, on the cognitive process of decision making and cognitive errors has been quite extensive [2,3,4].  According to his works, most errors occur in System 1 due to cognitive bias but these can be mitigated by debiasing which he explains is decoupling System 1 in order to engage System 2 [5,6,7]. This is not to say that System 2 is free of errors. The ideal decision making process is a combination of the two, but knowing the context is more important in order to maximize one or the other.

Although there are multiple ways to arrive at a decision in medicine, one of the most distinctive characteristics of expertise is pattern recognition. In a paper titled “Overconfidence in Clinical Decision Making” written by Croskerry and Norman [8], they explain how this pattern recognition is acquired:

“Thus, the effortless pattern recognition that characterizes the clinical acumen of the expert physician is made possible by accretion of a vast experience (the repetitive use of System 2 analytic approach) that eventually allows the process to devolve to an automatic level.”

Interestingly, they list confirmation bias and overconfidence as signs of medical errors. They call for more work on critical thinking and debiasing to avoid overconfidence bias in the medical field. Unfortunately as noted by the authors this has not proved effective in the clinical setting but it helps us learn more about clinical decision making. Nonetheless, we should still learn more about medical errors, optimize performance, and debiasing as proposed by Croskerry [5,6,7].

Developing expertise in clinical reasoning has always been a challenging puzzle in the medical field as we don’t have a direct measure of the process itself. The old belief that expertise came with experience has been scratched and replaced with the concept of deliberate practice explored by Ericsson [10]. This concept, based mostly in sports, music, and chess, still does not explain the whole story as described in this study by Kulassegaram et al. [11]. They found no single factor necessary and sufficient to explain expertise. Medical practice is too complex and makes deliberate repetition impractical in the workplace [12,13].

Unfortunately we are still studying decision-making as if it occurred in a reductionist-linear setting. Other factors that affect clinical reasoning should include teamwork [16], human factors and ergonomics, and use of technology[17]. These factors might also play an important role in the pattern recognition-experience-naturalistic decision making expertise.

One method of teaching clinical reasoning, described by Delany et al [18], is to make the expert clinical decision process more visible and reflective, as in the image below: 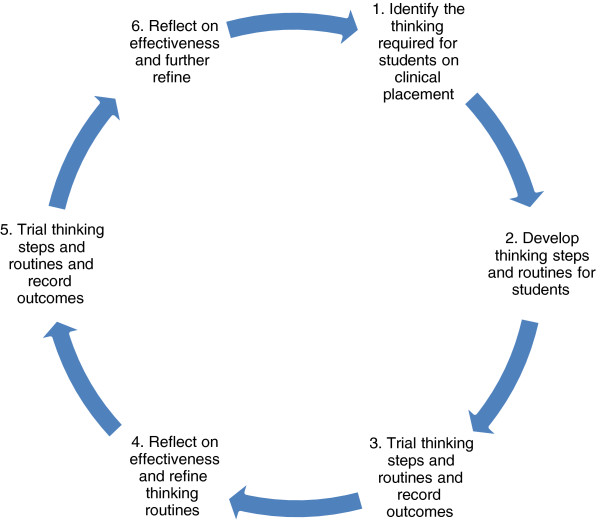 Expert clinical reasoning is a complex skill to master and to teach. Holmboe et al [9] summarizes this well in his commentary:

“What is needed now are more robust approaches to teaching, practicing and assessing clinical reasoning (use of teams, clinical decision support, better feedback loops) that can be effectively deployed longitudinally and continually.”

What are your thoughts on developing expertise in clinical reasoning?