A middle-aged man with a history of diabetes and hypertension presents with nausea, vomiting, and shortness of breath. His laboratory testing is remarkable for a leukocytosis, ketonemia, and an anion gap acidosis (pH of 7.13). The EM resident caring for this patient is surprised to find that the blood glucose is 121 mg/dL.

Which home medication is likely responsible for this presentation?

The patient’s presentation is consistent with diabetic ketoacidosis (DKA) in the absence of hyperglycemia. This entity is known at euglycemic DKA and it is increasingly recognized for an association with a newer oral diabetic medication class, SGLT2 inhibitors. Examples include:

The FDA has approved these three SGLT2 inhibitors for Type 2 diabetics, and at times, they are prescribed off-label for Type 1. The mechanism involves decreasing glucose reabsorption in the nephron’s proximal tubule (via inhibition of the sodium-glucose linked cotransporter-2 protein). This results in increased urinary excretion of glucose that is independent of the body’s insulin secretion.1

Other potential benefits of this class of medications include:1–3

In 2015 the FDA issued a warning, however, that SGLT2 inhibitors may cause ketoacidosis, urinary tract infections, and urosepsis.4 Since then, multiple case reports have been published showing an association between SGLT2 inhibitors and the development of euglycemic DKA.

Euglycemic DKA is an uncommon and likely under-diagnosed phenomenon, best defined as DKA with a lower than expected blood glucose (less than 250 mg/dL according to the American Diabetes Association).4–6

Potential precipitants, in addition to SGLT2 inhibitors, include:7

EPs may delay diagnosis, given the modest glucose levels at the time of presentation. This, however, is false reassurance because DKA is not defined by an absolute blood glucose. Interestingly, patients with euglycemic DKA may have a normal mental status despite marked ketoacidosis, and vomiting seems to be a common complaint.5

Euglycemic DKA treatment is the same as traditional DKA, and includes hydration, insulin, and supportive care. Patients with euglycemic DKA may also need a dextrose infusion given the lower glucose levels.

The mechanisms by which SGLT2 inhibitors cause or predispose to euglycemic DKA are unclear and likely complex. SGLT2 inhibitors may lead to a decrease in either endogenous or exogenous insulin, and an increase in glucagon production.8 This insulin deficiency or resistance may be mild in Type 2 diabetics, however, preventing the profound spike in blood glucose seen in traditional DKA.7

The evidence suggesting a link between SGLT2 inhibitors and euglycemic DKA remains limited to case reports. Both the FDA and the European Medicine Agency have reported cases of DKA with unusually low glucose levels.4,9 Peters et al. reported 13 episodes euglycemic DKA in patients taking SGLT2 inhibitors, though most were Type 1 diabetics.10 In Japan, 28 cases of DKA or ketoacidosis in patients taking SGLT2 inhibitors have been reported as of 2015. Of these, the initial blood glucose is known in only 14 cases, but in 9 cases, it was <300 mg/dL.8

Chicago based emergency medicine physician and producer of the Poison Review's monthly podcast. #FOAMed supporter one tweet at a time. 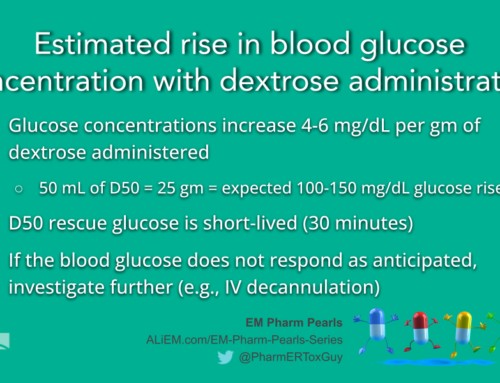